skip to main | skip to sidebar

This is incredibly geeky... and kind of cool. :3
Posted by Katie at 3:02 AM
Labels: vocaloid 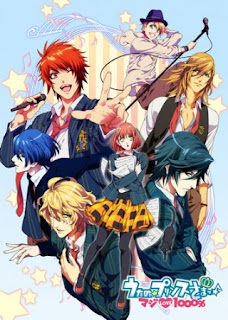 A reverse harem! My favorite kind of harem. :D So many pretty, pretty boys... and the heroine... has creepy eyes. 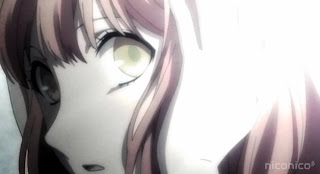 Seriously, what's up with these things? They're... filmy? Coloring over the pupil is not a good look.

I watched the first episode on niconico, which is quite the experience, especially with the comments on.

The character art was nice enough, except for the heroine's creepy eyes, but if you're watching it for her, UR DOIN IT WRONG. The music was pretty good. I really enjoyed the opening theme. The plot? It's alright, so far. Girl goes to musical school so she can write songs for her favorite pop idol and for some reason every attractive guy falls in love with her. If it's half as enjoyable as La Corda D'Oro I'll keep watching it, and hopefully its much more interesting then Miracle Train, whose beautiful bishonen couldn't make me want to keep watching it.

I've pretty much figure out who my favorites are going to be, too - the spunky blonde with the black nail polish (Shou) and the red head (Otoya). I could be wrong, but they're the ones who stood out to me the most in the pilot ep. 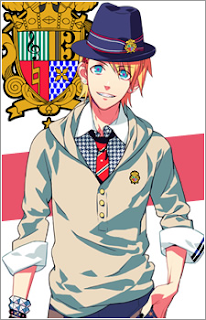 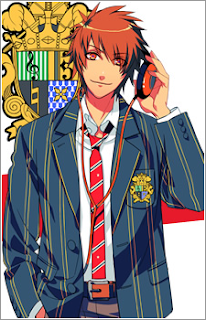 Posted by Katie at 12:46 AM
Labels: anime, utau no prince-sama

After having watched Everything Is Illuminated, I have to wonder if Liev Shrieber even bothered to read the book, or if he just read the summary. The movie barely manages to hit on maybe 1/4 of the novel, and even then it manages to get several things wrong. The things the movie manage to get wrong are much more galling then the things that it leaves out, in my opinion.

The story of Trachimbrod and Jonathan Safran Foer's many-greats grandmother is probably my favorite part of the book, and is entirely left out of the movie. I can see how this would have been near impossible to include in the movie, but it still disappoints me. Maybe if they had made it a 2 1/2 - 3 hour movie instead of an 1 1/2 hours, it would have been possible.

Alex's father is only seen at the beginning of the film and then again at the end. None of the hatred of Alex for his father or the concern he feels for his little brother Little Igor is shown in the film.

One of the biggest problems I have with the film is what they did with the main character, Jonathan Safran Foer. At the start of the film he is seen with a rather large collection of miscellany on his wall, various things he has "collected". Alex even refers to him as "The Collector" in the film, instead of "The Hero". I don't really see the purpose of adding this personality quirk, which only made Jonathan seem odd.

Making Lista Augustine's sister was another odd choice, but it didn't detract from the film. I don't, however, think it added anything, either.

The character I most thing suffered in the movie was Alex's grandfather. Making him Jewish was infuriatingly unnecessary and actually harmed the coherency of the film, leading to his forming of Heritage Tours, his interactions with Lista and his suicide (which they also altered) becoming nearly meaningless. It also added an unnecessary element of clichédness.

Maybe if I hadn't read the book before watching it, I might have enjoyed Everything Was Illuminated much more then I did. I loved Eugene Hutz (the lead singer of Gogol Bordello, which had three songs in the film) as Alex, he was definitely the crowning jewel. I believe Elijah Wood did the best with the part he was given, which wasn't much.

BBAW: Wednesday's Questions (On A Friday)

Do you snack while you read? If so, favorite reading snack? Sometimes I'll eat lunch and read at the same time, but I don't usually snack while reading. Too messy.
Do you tend to mark your books as you read, or does the idea of
writing in books horrify you? I've never felt the need to write in books, especially since most of the books I read are library books. Next time I re-read House of Leaves I might mark it up a bit, though.
How do you keep your place while reading a book? Bookmark? Dog-ears?
Laying the book flat open? Bookmarks! Definitely bookmarks. Dog-ears are ugly and leaving it flat open is just begging for a broken spine.
Fiction, Non-fiction, or both? Both. I love them both, and I'm usually reading at least one of each at any given time.
Hard copy or audiobooks? I prefer hard copy, since audiobooks are usually too slow, and the experience can easily be ruined by horrible voice acting or weird pronunciation.
Are you a person who tends to read to the end of chapters, or are you
able to put a book down at any point? I usually read to the end of chapters, but if the chapter is too long I can put it down in the middle. And sometimes I don't have enough of an attention span to make it to the end.
If you come across an unfamiliar word, do you stop to look it up right away? Yes, unless I can figure it out with context clues, and then sometimes I look it up anyways just so I'll know 100% what it means.
What are you currently reading? Catching Fire by Suzanne Collins, Specials by Scott Westerfeld, and Fast Food Nation by Eric Schlosser.
What is the last book you bought? The City of Ember by Jeanne DuPrau
Are you the type of person that only reads one book at a time or can
you read more than one at a time? 99% of the time I'm reading more than one book. It has to be an incredibly engrossing book for me to focus on just one.
Do you have a favorite time of day and/or place to read? Late at night, curled up in bed.
Do you prefer series books or stand alone books? I probably have a slight preference for stand alones, but not by much.
Is there a specific book or author that you find yourself recommending over and over? I'll always rec Dune to sci-fi fans, John Irving to just about anyone and Dancers at the End of Time to people who I want to mess with (in a good way).
How do you organize your books? (By genre, title, author’s last name, etc.?) Organization? Hahahahahahahahahahahaha...
Posted by Katie at 2:16 PM
Labels: books

Spike, or K-Fed as I shall refer to him from now on, is an annoying douche-bag. I believe he must have a Mary Poppinsesque bag full of fugly hats, because he is never seen without one. The one he regularly wears is bad enough but I really don't have the words to describe how hideous that peak billed monstrosity during his one-on-one with the camera was. KICK THAT FUCKER OFF. He's had his ass on the chopping block how many times? He's a mildly talented chef with a hugely inflated ego. Boring.

The winning dish looked excellent. I've normally liked Dale, but he was such a bitchy drama queen about Lisa winning for her bacon. Get the fuck over it. I love how he ripped her a new one for her negative attitude, though.

I am so glad Zoi is gone. Now we don't have to hear "Seriously guys, we're lesbians. LESBIANS. But you shouldn't treat us any different just because we're a couple," at the start of every show. And she was a shitty cook. The only bad thing about this will be Stephanie's increased whining that is sure to come.

And although I really want to the love the Kiwi, Mark, he just seems to fade into the background. I feel like he could be so much more. He definitely needs to speak out or act up or something.
Posted by Katie at 12:45 AM
Labels: television

My dislike for Pushing Daisies has seemingly manifested into full blown loathing by what I view as a chronic over-enthusiasm for it. My main complaints with the show are what seems to be everyone else's favorite points.

I couldn't get past episode two and ended up going back to the wonderfully funny Hotel Babylon. I suggest anyone else disappointed with the show do the same.
Posted by Katie at 6:25 PM
Labels: television

30 Days of Night turned out to be pretty awesome. I thought it was very faithful to the graphic novel, it only really seemed to diverge at the end, which I still thought was good, just not as good as the ending in the book. The cinematography was great, especially the shot with the aerial view over the vampires' slaughtering most of the town. The soundtrack could be a little over dramatic at times, but was very good on the whole. The vampires themselves were very kick-ass and I loved the CG/make-up that was used on them. I didn't find it very scary, but there were plenty of scenes that made me halfway jump out of my seat. It's not a movie that's going to make you think very hard, but it was still very enjoyable. If you aren't a fan of the graphic novel or immediately fall in love with the trailer you'd probably be better of Netflixing it, though, I don't think most people will be missing out on anything by not seeing it on the big screen.
Posted by Katie at 11:58 PM
Labels: movie
Home
Subscribe to: Posts (Atom)